The article below reaffirms the real need for aggressive products liability lawyers. Yet again, a manufacturer has released a dangerous product into the market with serious flaws that are acknowledged only “after the fact.” There was already government oversight. And yet, children and their parents were still left unprotected. I am proud to be a plaintiff’s attorney who fights for those harmed by dangerous products. Despite all of the “tort reform” efforts by insurance carriers, personal injury lawyers willing to take cases to juries remain the best hope for those injured by the callous indifference of companies.

At Reeves, Aiken & Hightower, LLP, all of our attorneys are seasoned trial lawyers with over 70 years combined experience. Whether it is criminal or civil, our litigators are regularly in Court fighting for our clients. Two of our firm’s partners, Art Aiken and Robert Reeves, are lifetime members of the Million Dollar Advocates Forum. Mr. Reeves has also been named one of the Top 100 lawyers for South Carolina in 2012 by the National Trial Lawyers Organization. Our attorneys include a former SC prosecutor, a former public defender, a former NC District Attorney intern, a former Registered Nurse (RN), and former insurance defense attorneys.  We welcome an opportunity to sit down and personally review your case. Call us today for a private consultation. www.rjrlaw.com 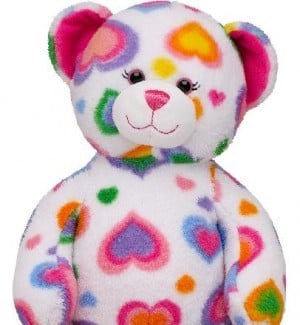 The Colorful Hearts Teddy Bear has been recalled by Build-A-Bear Workshop because its plastic eyes can fall out, posing a choking hazard to children.

For the third time this year, Build-A-Bear Workshop has discovered a potentially dangerous defect in its toys.

The Overland-based toy retailer is recalling 297,200 “Colorful Hearts Teddy Bears” because the toy’s plastic eyes can fall out, posing a potential choking hazard to children.

The news also comes on the heels of the U.S. Consumer Product Safety Commission’s announcement last week that Build-A-Bear agreed to pay a $600,000 penalty to settle allegations that it previously failed to report a dangerous defect involving its toy bear beach chair, which was eventually recalled in 2009. In that settlement, Build-A-Bear denied the commission’s allegations.

In this most recent recall, the colorful hearts bears — which were made in China — sold for $18 in stores and online from April of this year through this month. No injuries have been reported.

Jill Saunders, a company spokeswoman, wrote in an emailed statement that the bears passed an independent laboratory’s testing evaluation before being sold. But the company then observed that some production runs used ‘substandard fabric” that may tear around the bear’s eyes.

“We discovered the issue while doing ongoing quality and safety checks and immediately reported the issue to the CPSC and began the recall process,” she said. “That we have conducted three product recalls this year despite the fact that we have not received a single injury report related to any of those three products clearly demonstrates how seriously we take product safety.”

Patty Davis, a spokeswoman for the product safety commission, said Build-A-Bear reported the issue to the government this week.

“Any time a firm recalls a product, there is potential danger involved for consumers,” she said. “In this case, it involved young children, so we acted as quickly as possible.”

Consumers can return these bears to any Build-A-Bear store, where they will receive a coupon for any other available stuffed animal.

Ed Mierzwinski, consumer advocate for U.S. PIRG , the national association of state Public Interest Research Groups, said eyes falling off stuffed animals and dolls is a well-known problem that can lead to a choking hazard.

“Kids kiss their dolls,” he said. “Kids chew on their dolls. What’s going to fall off first is their eyes.”

Mierzwinski said he’s glad the company issued this recall — and that no injuries have been reported.

Still, he’s troubled by this year’s recalls and the penalty involving the 2009 recall.

“This company — its recent time line — gives me some concern that they really need to review their management and their risk analysis to make sure they are in compliance with the law to protect children,” Mierzwinski said.

Last month, Build-A-Bear and the commission announced a recall of a pink inflatable inner tube that poses a strangulation hazard if pulled over a small child’s head. The company said it had received one report of a 3-year-old girl pulling the inner tube over her head and having difficulty removing it. The inner tube is 9 inches in diameter.

The inner tube was part of a three-piece Fruit Tutu Bikini swimwear set for teddy bears. It was sold for $12.50 and was available in stores and online from April 2011 to August 2011. About 20,830 units were distributed.

And in August, Build-A-Bear recalled its “Love.Hugs.Peace” lapel pin because the paint on it contained an excessive level of lead. The company did so after initially defending the safety of the product when a California-based consumer health advocacy group raised concerns about it last year.

Besides three recalls in the past year, Build-A-Bear was accused of failing to report injuries from an item recalled in 2009. According to the product safety commission, the toy retailer learned of 10 reports of injury related to its toy bear beach chairs between July 2007 and January 2009. The toy beach chairs — about 260,000 of which were sold over a seven-year span — had sharp edges on their wooden folding frame that regulators said could pinch or even amputate a child’s fingertip.

But the company did not notify regulators of the incidents until two months before a recall was issued in 2009.

Under federal law, manufacturers and retailers are required to report to regulators within 24 hours upon receiving information that a product contains a defect that could create a substantial hazard or unreasonable risk of serious injury or death.

In its defense, Build-A-Bear said it did not have enough information at the time to conclude that the defects could create such a hazard or risk. So it does not believe it violated that reporting requirement.

“When Build-A-Bear Workshop had sufficient information … it promptly began working with CPSC in March of 2009 on the voluntary recall of the toy bear chair,” the retailer said in a statement.

This article was originally posted in the St. Louis Post Dispatch on December 24, 2011 by Kavita Kumar.